First built in 236 of the Buddhist Calendar (307 years before A.D), by the first governor of Vientiane, Phaya Chanthabouri Pasitthisack or Bourichan. It resembled a kiln of about 9 meters high and 10 meters wide. The original was built in 1566 by King Saysetthathirath, and was restored in 1953. The golden stupa is 45 meters tall and is believed to contain a relic of the Lord Buddha. The gold centerpiece of this stupa echoes the curve of an elongated lotus bud. Today it is the most important national cultural monument in Laos. 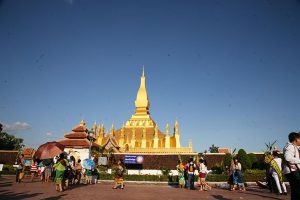 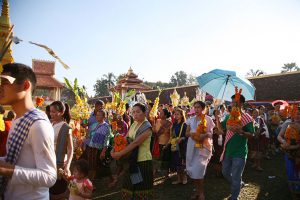 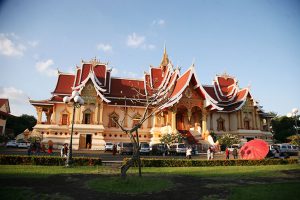 SISAKET TEMPLE
The only ancient temple remaining intact after the defeat of the Siamese in 1828. It’s located in the center of the old city, where it was built in 1818 by King Anouvong. The old monastery stands intact in its original form and is certainly one of the most interesting in the country. Inside the main hall, the courtyard walls house hundreds of little shelves containing a total of 6,840 Buddha images.
Open daily 8:00am – 4:00pm.

Originally, this ancient temple was built in 1565 by King Sayasetthathirath to house the Emerald Buddha 1565-1779 (lost to the Siamese in 1828) as his personal place worship. It was later reconstructed in 1936. For this reason monks have not taken up residence here unlike other temples in Laos. During the 1970s the temple was converted from a place of worship into a museum and now houses the finest national collection of Buddhist sculptures and artifacts. From the terrace of Ho Pra Keo, one can enjoy a view overlooking the president’s Palace (former Royal Palace) and garden.
Open daily 8:00 am – 12:0pm, 1:00pm – 4:00pm.

The original city pillar of Vientiane is found in Wat Simuang located in Ban Simuang village along Setthathirath Road. It was built in the 1956 and is believed to be guarded by the spirit of a local girl called “ Si ” Local legend has it that Nang Si, who was pregnant at the time, leapt to her death as a sacrifice, just as the pillar was being lowered into the hole. A very colorful Phasat Pheung (wax pavilion procession) attracts large crowds to Wat Simuang temple, taking place just two days prior to the That Luang Festival in November.
Open daily 7:00am – 8:00pm.

The memorial monument, Patuxay, was built in 1957 and is perhaps the most prominent landmark in the city. If is situated on Lane Xang Avenue. While the arc de Triomphe in Paris inspired the architecture, the design incorporates typical Lao motifs including “Kinnari”, a mythical bird woman. Energetic visitors can climb to the top of the monument, which reveals an excellent panoramic view of the city.
Open daily 8:00am – 5:00pm.

SUNSET BY THE MEKONG RIVER

Choose your favourite riverside restaurant from the many choices in Vientiane and enjoy fantastic views of the sunset right on the other side of the river (Thailand). Some restaurants provide good views, which include Bor Pen Yang, Tawan Riverside, Khong View, and Moon the night.

That Dam or Black Stupa in Vientiane is one of the few ancient stupas that remains after the Siamese occupation in the 17th century. It is located in the center of the town and has become one of the most popular city landmarks. It is quite an interesting sight in the middle of what is quickly becoming, a modern city. Since it has not undergone any renovation, vegetation has started to grow out of it which adds to its charm. According to legend, the Black Stupa was built in the 16th century and it is believed to be the home of the seven-headed dragon that struggled to protect Vientiane, her people, and the entire kingdom from Siamese invaders in 1827.

COPE VISITOR CENTRE
Museum Cooperative Orthotic and Prosthetic Enterprise, or COPE, is a locally run non-profit working with partners to provide rehabilitation service for Unexploded Ordnance (UXO) survivors and other people with disabilities across Laos. The COPE Visitor Centre houses a free permanent exhibition about UXO in Laos, stories from survivors and information on the important services provides by COPE. Interactive displays, excellent documentaries and imagery provide a thought-provoking experience to visitors. There is an opportunity to support COPE through the gift shop or donation.

Sunset at Vientiane on Mekong rever is one of nice spot to taking place to relax, today from Chao Anou to Kounta vilage there is many restaurant, fruits sharked and some cold drink serving there. 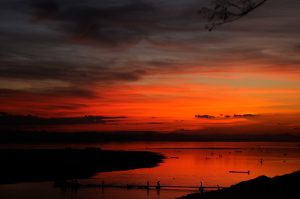 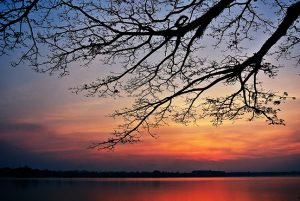 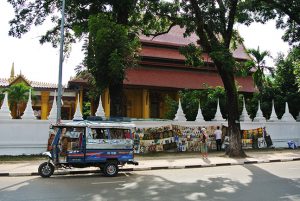 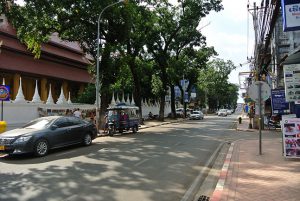 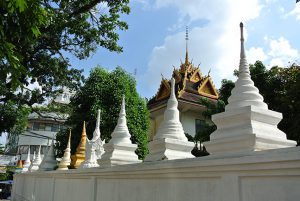 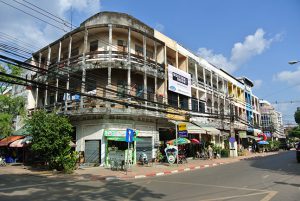 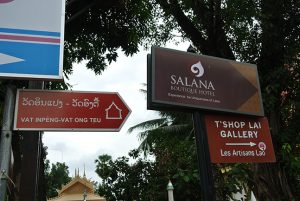 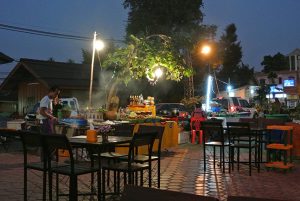 Restaurant at Mekong river side