108 Jobs is a website where providing Jobs for local and foreigner candidate, the clients can also post the jobs. 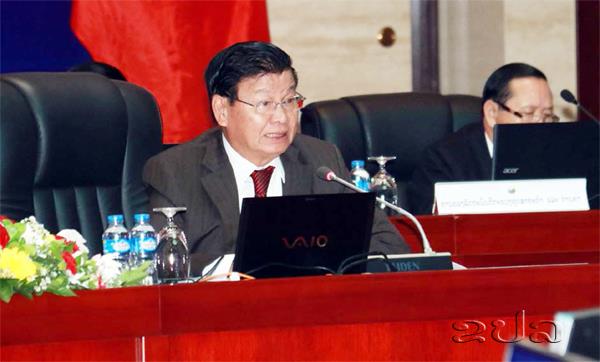 Addressing the closing ceremony of the two-day meeting between the government and Vientiane Mayor and provincial governors on Sep 8, Prime Minister Thongloun urged continued rural development and poverty eradication and greater attention to improving the quality of education and health service in remote and rural areas and increase investment in basic infrastructure development and improvement in these vulnerable areas saying that such investment must meet sustainable standards.

The Prime Minister asked the participants to strengthen the strictness of the management and inspection of timber exploitation and timber movement, make timber businesses integrated and promote the participation of local communities in managing and inspecting national forests.

He also urged them to increase the effectiveness of the rule of law and improve the collaboration mechanisms between central sectors and local administrations with respect to the implementation of the socio-economic development plan.

He also asked cabinet members, ​Vientiane Mayor and provincial governors to make greater efforts in supervising, monitoring, promotion and inspection of the implementation of the priorities under their responsibility.

Last week’s meeting provided the participants with the opportunity to evaluate the implementation of resolutions, orders, notifications and agreements of the government over the past months including the implementation of Prime Minister’s Order No 15 on the strengthening of the strictness of the management and inspection of timber exploitation, timber movement and timber business and direction on the promotion of commercial production and food security as well as the government’s preparation for the launch of visit Laos Year 2018.

The meeting was also attended by representatives of Party organistions, the National Assembly, legislative bodies, judicial bodies, Lao Front for National Construction and mass organizations, provided the participants with the opportunity to share comments on the evaluation of the government implementation of the national socio-economic development plan 2017 and direction of the draft 2018 edition and the implementation of the results of the overseas visits by Party and government officials. 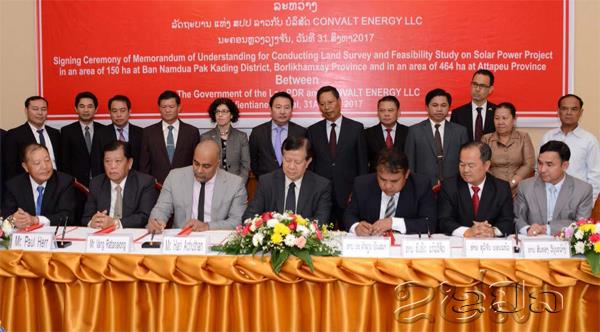 (KPL) Convalt Energy LLC has spent over 3.3 trillion kip (US$400 million) to conduct a feasibility study into the possibility of developing a large scaled solar power project in Bolikhamxay and Attapue provinces.

A memorandum of understanding (MOU) was signed on Aug 31 in Vientiane Capital between Deputy Minister of Planning and Investment, Mr Khamlien Pholsena and Chairman and Chief Executive Officer of ACO Investment Group and Convalt Energy, Mr Hari Achuthan in the presence of representatives from the Ministry of Energy and Mines, an provincial planning and investment departments of Bolikhamxay and Attapue.

Convalt Energy, the first U.S. based company to conduct such a study in Lao PDR, founded as a Delaware LLC in 2011 is a portfolio company of ACO Investment Group.

The solar power development project will involve the construction of a solar power plant on 150 ha in Namdeua village, Pak Kading district, Bolikhamxay Province and another one on 464 ha in Attapue province. Both will have a combine generation capacity of 300 megawatts.

The project is expected to created jobs for hundreds of local people.

The solar power project comes under the Convalt Energy LLC’s construction plan on renewable energy and is in line with the Lao PDR government’s energy policy. The project construction is expected to last approximately two years.

“The firm combines global vision with local insight, relying on a top-flight team of operational professionals to deliver superior service, maintenance and management.  In the short to mid-term, we are developing utility scale solar farms.  In the mid to long term, we expect in addition to developing generation assets to focus on transmission and distribution projects, while we operate and maintain our projects via long term maintenance contracts,” said Mr Hari.