Cartoon artworks is not very common among Lao peoples, some may have seen several black and white cartoon in elementary school books and  Japanese cartoon or animation through television sometimes.

Since the year 2004 Lao cartoon is booming again with a man who has studied from Arts and Metier school in Paris, and has introduced both print and animations cartoon in Laos, mostly the characteristics or cartoon aimed using for rural development though education and health care which supported by International Organization such as UNICEF, WHO, FAO, WFP, UXO, as well as UNDP., etc…

Chongkham Phonekeo or CK, a creators of many characters which friendly with readers or almost all kind of audiences, he spending most of times during his returned from year 2000 to study the peoples, especially the target group in order to pickup the specific things which relating to their culture, behaviours and refined an altitude of those peoples and finally tracing to the pieces of papers.

Ck is very warm, friendly and lot of humour relating to the cross culture towards the cartoon, it’s a TABOU to say that he seem to see things as cartoon but sometime it’s. 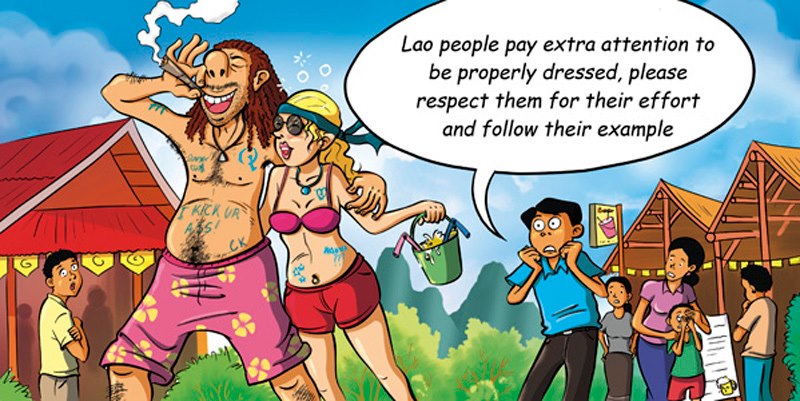 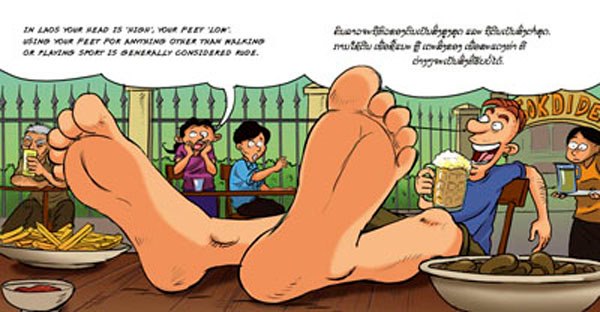 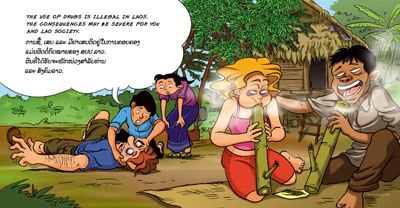 Those Cartoon showing above is published on a tourist guide book in Lao PDR. Do’s and Don’t as we would notice at the sign board showing at the tourist spots.

With a fast movement of Social Economic in Lao PDR is significantly, the number of investors, tourists in increasing at the same time the service proving and man skill workers is still minimum.

Whooping is local firm consulting has design and setup professional sill development for those sectors in particularly aimed to ensure and provide skilled workers, and professional services in Tourism sectors especially for Japanese customers.

Our services has dividing in to specific sectors as following:

If any company, Hotel, Restaurant, or related to usage of Japanese language for workers such as working and learning Japanese at the sametime, we can also offer the services.

We try to provide always the best offer and significant during your trip in Laos.

For more information, please do not hesitate to contract

iJobsCo. Ltd. or iJobs is a private enterprise with an aim of becoming a one-stop Human Resources Management and Development. iJobs work to develop and increase human resource capacity and employ-ability and, therefore, our products and services are specifically designed to assist employers in fulfilling their human resource needs while helping jobseekers to identify the right choice of careers.

Strategically,iJobs is the human resource “Bridge” that connects employers and jobseekers,for them to be able to reach for each other effortlessly. 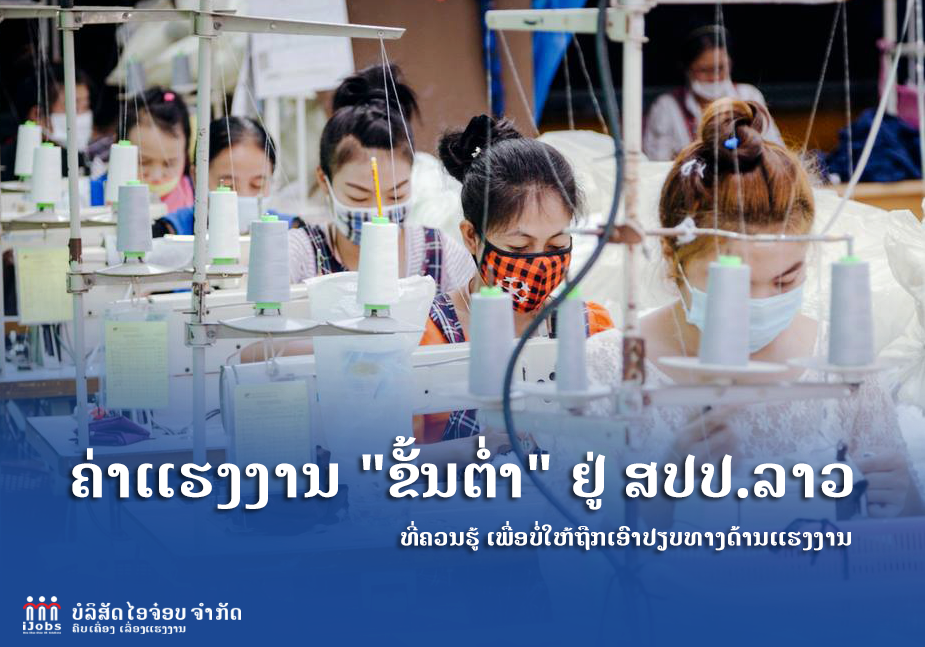 iJobs understands that employers not only look for employees that can fulfill the positions in their organisations but also need qualified employees who can help the organizations reach the goals and achieve the visions qualitatively and quantitatively,technically and financially, and environmentally and socially.

iJobs is a domestic private enterprise that can help integrate international work ethics with local traditional cultures in Laos, and vice versa.

Vocational for jobs opportunities in Japan

Lao Asia employment service is a place for provide Vocational Japanese language training and find the jobs by contract in various area in Japan.

Lao Asia Employment is registered under the right and agreement between Lao and Japan government in participation and guaranty by Ministry of Education and Ministry of Social welfare in both country.

The most requirement at the moment are: Agriculture, House keeper, Construction workers, and nursing Cubic Consultancy, Cubic gallery division in cooperate with Department of Fine Arts School and Lao Ashiya Association has conducted for several years painting workshop for children in the rural areas from northern part to southern parts of Laos.

The workshop aimed to help and be apart for expanding children in rural ares to describe their mind and their thinking relating to the Natural resources Management and preservations. With a warm coordination with Fine arts Department, Lao Ashiya Association and the education department at the provinces the workshop has gained very interesting ideas, especially the children’s describe very well about they hometown, lifestyle, and the conservation about the natural resources.

Some of them cannot even have a chance to see and use watercolours, before starting the painting they was very exciting and many of them can interprets very well, and of-course they parents was also very surprised.

Phonegnam elementary and secondary school school situated in Vientiane province at Phonegnam village, supported by Lion Club since 1997. Mr. Gejiro Shigemura who is one of the Ashiya city assembly has tried very hards for fund raising which not only funding for school construction and also has find the scholarship for the best students to continue his or her studies in Japan. Since 1997 Professor Hiroshige Takada who is a key person and in charge of the project has also made a significant ceremony that was a time capsule has put in the ground since the construction has began and the time capsule will be dig out again this year in April.

During 20 years past, Mr. Gejiro Shigemura has visit Phonegnam school 2-3 times times per years and also has find some activities for reinforcing children to learn, play and happy. With a cooperation with Cubic Consultancy, Media unit and Lao Ashiya Association has conducted a painting workshop with those children here in  September 2014

Organic farm Vangvieng is running by Mr.hanongsi Sorangkoun and crete a lot of organic products and have fresh vegetable restaurant at the place. For every season there is many young volunteers from many place learned and experimenting how to growth crops without chemical and none toxic.

At the same time, Mr.hanongsi Sorangkoun also provide an outdoor education relating agriculture for children around this area to and has create an Equal Education for All.

For more information on workshop and education for children in rural areas please contact: cubic.consultancy@icloud.com (KPL) The Japanese Government provided grant assistance worth US$ 538,555 dollars  to expand or reconstruct school buildings at six schools in the provinces of Vientiane, Savannakhet, Champasak and Attapeu, through its Grant Assistance for Grassroots Human Security Projects (GGPs).

At these schools, the conditions of school buildings are poor, being run down.

Therefore, the projects aim to improve the educational environment by constructing a block of three to six fully furbished classrooms.

The second project is for the construction of school buildings at the Vongsomphou Lower Secondary School in Attapeu Province.

Therefore, the project aims to improve the educational environment by constructing a block of five fully furbished classrooms and a faculty room.

The other project is for the expansion of school buildings at the Nasak Secondary School in Vientiane Province.

At this school, the number of students is expected to increase while classrooms are already overcrowded.

Therefore, the project aims to improve the educational environment by constructing two additional blocks of four fully furbished classrooms.  As a result, the average number of students per class will decline.

Through these six projects, a total of about 2,000 school students will enjoy the benefits of an improved educational environment.

In his remarks, Ambassador Hikihara emphasized, “It is critically important that the benefits of the projects should be enjoyed by people in the respective local communities as this is the most significant characteristic of GGPs.”

He continued, “Japan attaches great importance to basic education as a foundation for development. Through this GGP scheme, Japan has funded 282 education projects since 1989, including 171 primary schools and 61 lower and upper secondary schools”.

(KPL) Twenty students and one supervisor, who departed from Vientiane on Mar 6, will deepen their understanding of Japanese culture and language through their participation in a study tour under the “JENESYS 2016” program supported by the government of Japan.

The group will stay in Japan from Mar 7 to 14 and take part in the “Japanese Language Communication” programme.

The study tour aims to promote a better understanding of Japanese culture, history and society among those learning the Japanese language.

The twenty Lao students mentioned above were selected in collaboration with Japanese language institutes in Vientiane Capital and other provinces.

These Lao students will visit Tokyo and Fukui Prefecture (located near the centre of the Japan Sea Coast).

Besides visiting various historic and traditional landmarks, they will also have the opportunity to experience a student exchange and a farm-stay (working farms to experience a rural lifestyle).

The participants are expected to improve their Japanese language skills and contribute to strengthening the friendly relations between Japan and the Lao PDR.

JENESYS 2016 is a people-to-people exchange programme between Japan and the Asia-Pacific region, and will succeed JENESYS 2015.

The Japanese Government will invite about 340 young people from Laos to Japan during this fiscal year.

The programme is expected to promote mutual trust and understanding among the people of Japan and the Asia-Pacific
region, and to build a basis for future friendship and cooperation.
Sources: http://kpl.gov.la/En/Detail.aspx?id=22759